Updated a month ago

A List of related records card is a common kind of card in Beacon. It allows you to show records that relate to the record you are looking at. 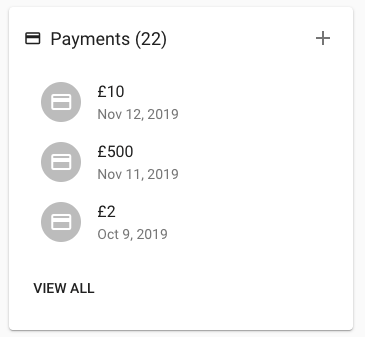 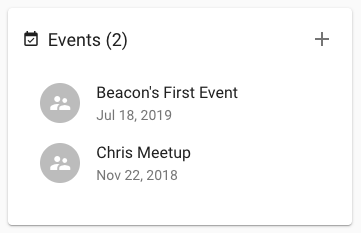 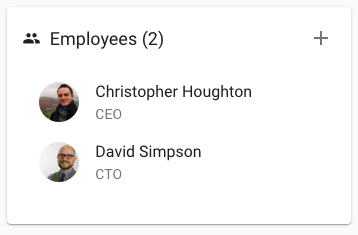 This card allows you to create new related records by clicking the + icon on the card. The relationship will be pre-filled for you, meaning there's one less field to input: 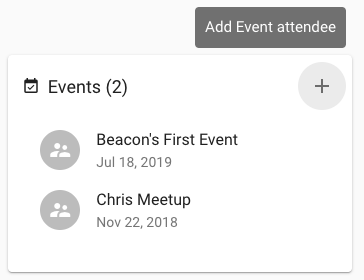 To edit a card, just click the card when you're in customisation mode. A dialog will open, allowing you to edit a number of different card settings.

There's quite a few fields, so we'll go through each of them in turn:

This should be fairly self explanatory - what title and icon would you like the card to have?

Records relate to one another by "pointing" in Beacon. For example, a payment record would "point" to the person who made it, or a person might point at the organisation they work for.

This is (usually) set by default to the record type that you're adding the card to. Most of the time, this is all you need.

However, there are some more advanced scenarios that this is useful for - we'll cover these at the end of this article.

Let's say you wanted to list payments made by someone when viewing their person record. On the payment record type, the "Person" field is pointing at the person record type:

As such, you would choose the Person field in this related field option.

However, if you wanted to show the payments that had come as a result of someone's fundraising efforts, you would store them in the fundraiser field on the payment:

In this case, you'd pick fundraiser in this related field option:

On to the easy stuff. You can surface up to 4 fields from the record you're listing in the card - one "title" field, and three optional secondary fields: 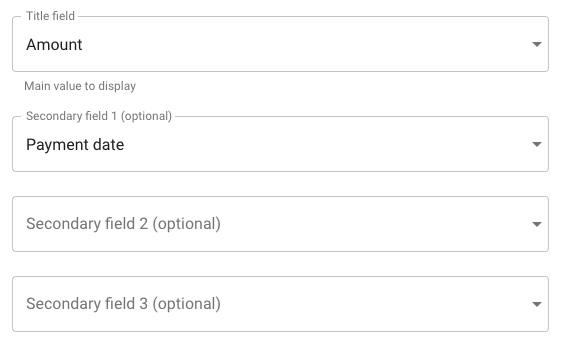 Last but not least - filters. Sometimes you won't want to show all related records - just a subset of them. Filters allow you to define the criteria you want, using the standard Beacon filtering interface.

As mentioned above, relationships in Beacon work using "pointers". One record type can point at another. Payments > people, people > organisations, etc.

When you start to think about all of the relationships that exist in a CRM, things can start to get a little tricky. Sometimes it can be really useful to list some related records, but they don't always relate directly to the record type you're looking at.

To help deal with this, we've built this card to allow you to list records that relate to related records of the record you're viewing. Woah 😲.

While this sounds incredibly confusing, there are a number of very reasonable scenarios below.

Often major donors have personal trusts that they make donations via. Technically the payments were made by the trust, rather than the donor themselves, so the payments shouldn't point directly at the donor's person record.

This is a problem, because when you open up their person record in Beacon, it's important to be greeted with that information front and center!

To achieve this, set Pointing to as organisations, rather than people. Additionally, you'll need to set a Pointing field, which is the field on the person that ties them to the organisation: 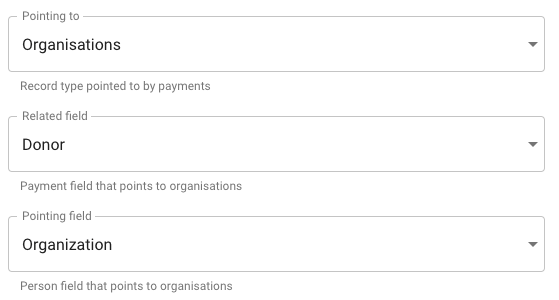 This is an opposite scenario. If you're tracking donations made by employees working at a business, it's important to be able to quickly see the payments made by all employees working there when viewing their organisation record.

When adding this card to an organisation record type, set Pointing to as people, rather than organisations. You'll also need to set the Pointing field as well, which is the field that ties people to organisations: 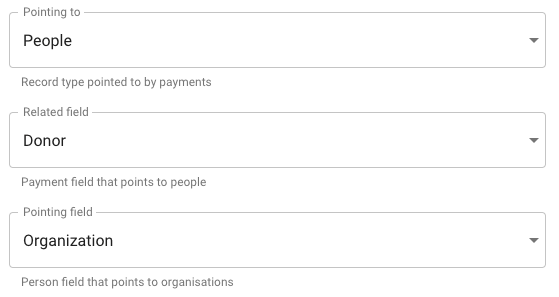 Other scenarios where this can be useful: